The Rise and Importance of Telemedicine

The upbeat and warm sound of last year’s hit “Swingin’ Down the Lane” by Isham Jones fills the quiet of your parlor as you remove the stethoscope from your neck and lower the volume on your new radio. As you sit in a chair as angular as a Picasso, you pick up the latest copy of Radio News magazine and shake your head in wonder. 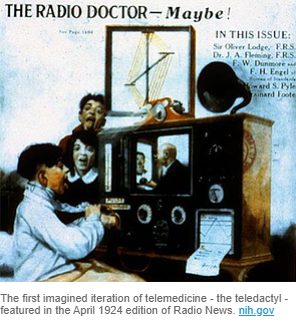 On the cover of the April 1924 edition of the magazine, three children are seated in front of a square system with two dials, a flaring horn, and a screen in the center of the contraption. With mouths wide open, the kids are saying “Ahh” as the image of a suited doctor equipped with robotic fingers like the metallic tentacles of the Martian ships from The War of the Worlds is projected onto a screen. Hugo Gernsback named this invention the teledactyl.sham Jones fills the quiet of your parlor as you remove the stethoscope from your neck and lower the volume on your new radio. As you sit in a chair as angular as a Picasso, you pick up the latest copy of Radio News magazine and shake your head in wonder.

The history of telemedicine

The ability to conduct a full doctor’s appointment via video call did not happen overnight. From 1959-1964, the Nebraska Psychiatric Institute and Norfolk State Hospital were able to provide medical care through a video link.

As the Space Race bustled on, NASA started researching telemedicine. In 1988, an earthquake decimated Armenia, and by 1989, NASA’s Telemedicine Space Bridge Project provided telemedicine services to the earthquake victims, marking the first time the service was used internationally.

As the 2000s took off, video chat programs and apps made it possible to communicate anytime and anywhere. By the 2010s, Americans were looking to cut down on healthcare costs and find a way to provide better care to patients. 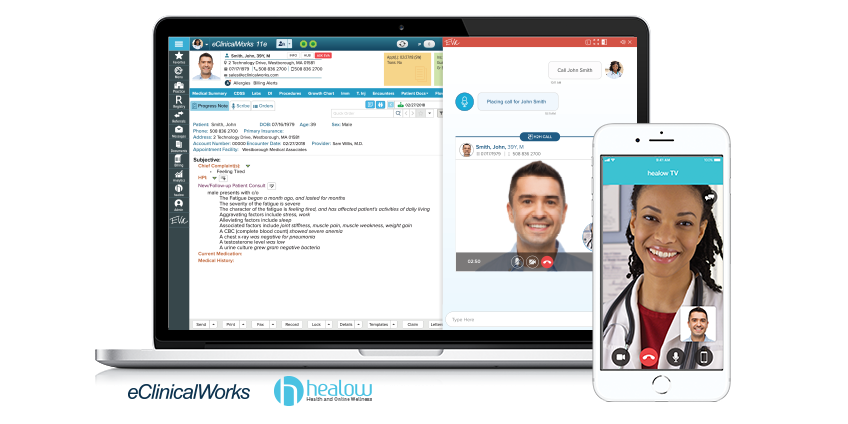 Telemedicine is the answer

In many cases, it can be difficult for patients in rural areas to make it to the doctor’s office. Not every medical encounter requires a physical office visit, and healow TeleVisits lets providers deliver the same quality care from the comfort and convenience of being at home or on the road. healow TeleVisits are secure and reimbursable through most insurances, and eClinicalWorks® provides you with expert knowledge and support if you ever need help.

Watch this podcast to see how healow TeleVisits has helped the providers and patients at The Clark Clinic in Florida.

Smooth electronic thumping fills the quiet of your apartment as you remove the stethoscope from your neck and tell Alexa™ to lower the volume of the music. As you sit in your plush leather La-Z-Boy® chair, you pick up your tablet and open up the healow TeleVisits app to check in with a patient miles away.

From the teledactyl to healow TeleVisits, the concept of telemedicine is now a reality.

At eClinicalWorks, we are 5,000 employees dedicated to improving healthcare together with our customers. More than 130,000 physicians nationwide — and more than 850,000 medical professionals around the globe — rely upon us for comprehensive clinical documentation, along with solutions for Practice Management, Population Health, Patient Engagement, and Revenue Cycle Management. Privately held, and driven by innovation and excellence, we have a single focus — providing our customers with secure, cloud-based solutions to their healthcare IT needs.