How does an established practice improve?

Imagine for a moment that you run a small family health practice. You’ve been a part of the community for more than 50 years, and deliver quality care to thousands of patients, young and old. You’ve kept up with developments in healthcare, expanded the services you offer your patients, and even made the transition to Electronic Health Records without much trouble.

Now, how do you get even better?

That was the situation facing River Road Medical Group of Eugene, Oregon. Founded in 1961, the practice is a fixture in its community, and since 2007 has used the eClinicalWorks EHR to improve its efficiency and effectiveness.

“We have been serving our community generations,” Dr. Patricia Buchanan, family practice and River Road’s owner, told us during a recent visit.

But Dr. Buchanan understands that standing still is not an option in healthcare today.

On the one hand, the advent of the EHR has transformed the practice’s chaotic “chart aerobics” routine. There was a time when River Road employed six front-office staff. Every time a patient arrived, one or more of those employees would hunt for the patient’s paper chart, which had to be located before the medical encounter could proceed.

The EHR transformed that into a process involving just a few and meant River Road needed only two people at the front desk.

But with EHRs now nearly ubiquitous in American medicine, the question is no longer whether you have one, but whether your staff is getting the most mileage out of that system.

One small but critical point that Dr. Buchanan focused on in the early days of EHR implementation was making sure that she didn’t allow the computer to distract her attention to the detriment of patient interaction. That meant making a conscious effort to maintain eye contact with the patient, even while taking advantage of the EHR to document the case.

A more extensive change at River Road was the implementation of Patient Portal, Messenger, and other tools to improve the practice’s Patient Engagement efforts.

While Patient Engagement can get very involved and specialized within the healthcare industry, the basic concepts are clear to anyone who’s ever had an upcoming medical appointment. Sometimes, you know your good health depends upon keeping that appointment, but you put it off anyway.

A 2015 article in BMC Health Services Research looked at the administrative databases of a large medical center and 10 regional hospitals for the period and found that no-show rates averaged 18.8%, costing practices nearly $200 for each missed visit.

The cost to patients' health, of course, is incalculable, involving conditions that may get worse and diseases that may go undetected until it becomes too late for effective treatment.

at the time, River Road was finding its Patient Engagement efforts confirmed the study’s point that many outreach campaigns were ineffective. Practice Manager Josie Van Scholten recalls sending 11 letters to one patient in an effort to get her to have a mammogram. There had to be a better way.

Messenger to the rescue

Of course, there is a better way. We call it eClinicalWorks Messenger.

River Road now uses Messenger campaigns to reach out to patients through email and texts, while reserving phone calls for those patients who do not respond to electronic appeals.

It's making a difference at many practices like River Road. Again, it’s not that Patient Engagement was non-existent at River Road, or that the practice faced particularly elevated levels of any particular disease. Rather, using campaigns illustrates how a well-established practice can make further progress.

According to the Centers for Disease Control, Oregon is among a group of Western states with the lowest incidence of colorectal cancer in the U.S., with fewer than 35.5 cases per 100,000 population. But the state’s death rate from such cancers is slightly higher than neighboring California and Washington State.

If online Patient Engagement tools could make a difference, why not use them?

As it turned out, between 2014 and 2015, River Road increased compliance with recommended colonoscopies from 27% to 35%. Those eight additional percentage points of compliance, when multiplied across the more than 4,000 people River Road serves, mean many additional screenings are being done would have taken place without the Patient Engagement campaign.

River Road staff have also made a concerted push to get their patients to use the Patient Portal, which helps them taken greater control of their own health while giving providers another way to put reliable health education materials and appointment reminders in front of them in ways that are likely to be noticed.

A matter of persistence

As these examples demonstrate, effective Patient Engagement relies upon both great technology and effective communication among medical providers, patients, and the people behind the scenes, including a practice’s office staff and the developers and account managers at eClinicalWorks.

No matter how good the technology is, implementation and follow-up are a matter of hard work.

“I don’t think the patients really understand how much in primary care is done by the support staff,” said Megan Fields, River Road’s quality care manager.

The key to success doesn’t involve highly specialized knowledge, brilliant insights, or massive staff training in high technology. It involves common sense, persistence, and a willingness to apply a few new concepts in a variety of ways.

That means training providers to remind every patient who comes the office to sign up for Patient Portal if they have not already done so — to the point where today more than 65% of River Road’s patients can use Portal to check their records and messages.

It means using student volunteers to train patients in the use of Kiosk while they are in the waiting room.

Perhaps most importantly, it means talking to patients, understanding their individual circumstances and the real-world problems and limitations they encounter — the better to develop responsive solutions.

“Laying the groundwork is pivotal,” Van Scholten said. “It’s OK to take it slow, take bits and pieces. To say, let’s start with flu shots, something simple. It doesn’t have to be all or nothing.” 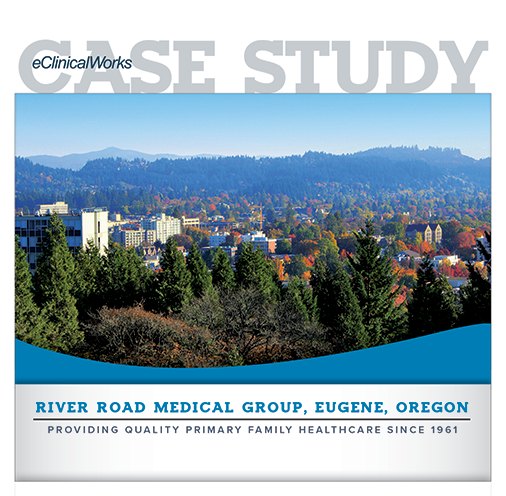