If there’s anything more difficult than developing healthcare IT, it’s implementing it. And we’re not talking here about the developers and trainers at companies such as eClinicalWorks whose job it is to teach the software to clients. We mean how clients themselves adapt to rapidly changing technology.

eClinicalWorks focuses a lot of time and attention on training. But the best trainer in the world cannot be certain that clients understand the tools they use every day until they demonstrate confidence in the use of new technologies, and show that they are thinking differently about processes and workflows.

How the West Was Won

While every practice’s experience is unique, there are some clients whose size and diversity make them veritable laboratories for how to implement new software.

We are reminded of Carson Medical Group, a well-established Nevada multi-specialty practice that, beginning with eClinicalWorks in 2007, had seemingly checked all the boxes. Electronic Health Records were in place. Physicians, nurses, and office support staff were trained. Specialists were using the EHR to good effect to document cases — whether in family medicine, pediatrics, OB/GYN, or ear, nose and throat medicine.

Then along came Meaningful Use and Patient Engagement, forcing another round of change and innovation upon a practice that was just getting comfortable with the last one. Carson’s front office manager in 2011, Janet Turner, was frank with us:  “It was rough in the beginning for me to learn it.”

Turner persevered. For six months, she took on the lead role at the practice of learning how to use eClinicalWorks to meet the requirements for Meaningful Use. It was her task to help providers understand that just as they had grown accustomed to and comfortable with previous changes — like the 1996 Health Insurance Portability and Accountability Act — it was time for them to adjust once more to a new reality.

Carson Medical Group’s path to success involved a determined and coordinated effort to use Patient Engagement tools, involving a bit of fun and creativity along the way. Staff printed up bright, lime-green tee-shirts with the slogan “Got Portal?” as a way of reminding staff and patients alike to use online resources to check records, labs, and messages.

Once engagement efforts were in place, staff made the most of them. eClinicalWorks Messenger, for example, has been used to send more than 200,000 appointment reminders. And when Carson staff ran into problems or difficulties, they were willing to turn to eClinicalWorks for advice and assistance. That understanding — that you don’t have to do it all yourself — is an integral part of successfully adopting a new mindset.

How Attitude Is Almost Everything

So, mix technological advances, the demands of a busy medical practice, and the financial pressure cooker that is today's healthcare environment, and what do you get?

It depends in large part upon your attitude.

In the face of rapid change, medical practices today have a choice. On the one hand, they can treat change as the enemy. That means waiting until change is thrust upon them and then coping with it as best they can, with temporary fixes and workarounds, and the cheapest possible technological tools to meet minimum requirements.

The far better approach is to change the collective mindset at a practice, to recognize that change is not a once-in-a-while event, but a constant feature of life in 21st-century healthcare. That’s what eClinicalWorks clients such as Carson Medical Group have been doing for years. And while technological tools are an indispensable part of meeting the challenge of change, the battle can’t be won without fresh thinking.

Another Success Story Back East

The Washington, D.C. suburb of Laurel, Maryland is a continent away from Nevada, and MedPeds, a small private practice, operates on a very different scale from Carson Medical Group. But their experience of success in adapting to change has been similar.

Back in 2004, MedPeds was struggling with lost medical charts, gaps in care, and growing frustration among providers and staff. The need for an EHR was obvious, but the choice of which vendor less so.

In 2013, MedPeds was recognized for its efforts by being named a recipient of the HIMSS Davies Award of Excellence for healthcare IT implementation at an ambulatory practice.

More success is likely on the horizon, because MedPeds continues to position itself for success in the increasingly challenging world of value-based healthcare. The practice uses eClinicalWorks for their Chronic Care Management program, which, beginning in January 2015, has allowed practices to earn reimbursement for non-face-to-face interactions with chronically ill patients.

Beyond the IT: The Real Key to Success

For all the technology and hard work needed to implement, success stories such as those at MedPeds and Carson Medical Group unfold because people choose to think differently about change, seeing it as an opportunity to refocus efforts on what matters most — patients.

After all, since mandates, reporting requirements, and government incentive programs are a fact of life that’s here to stay, it only makes sense to use them as a vehicle for re-examining even the most well-established workflows.

In just five years, “workflow” has gone from industry buzzword to an integral part of nearly every healthcare IT discussion. The reason is clear: Workflow is where everything comes together, from training and experience to technological bells and whistles, patient input, and dashboards to keep track of it all.

Medical practices large and small, from the suburbs of our nation’s capital to the (formerly) wild west, accept that constant self-examination is an essential part of promoting wellness. eClinicalWorks is excited to play a role in helping them achieve those goals. 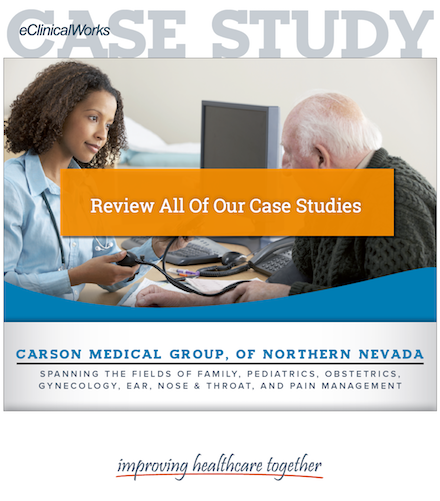