A Prescription for Safety, Legibility, and Ease of Use 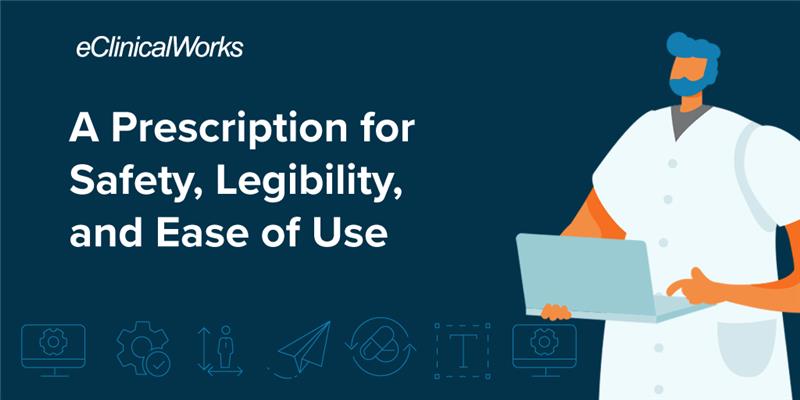 Back in 2000, Donald M. Berwick, then CEO at the Boston-based Institute for Healthcare Improvement, coauthored an editorial article lamenting the persistence of paper medical records and handwritten prescriptions.

“We should now hope that the death knell has at last been sounded for the handwritten paper prescription; and the paper medical record, a dinosaur long overdue for extinction, may at last be en route to replacement by far more useful and reliable automated systems,” Berwick and fellow author Lucian M. Leape wrote in “Safe health care: are we up to it?”

More than 20 years later, Berwick’s question has been largely answered in the affirmative. The majority of U.S. medical practices have embraced Electronic Health Records (EHR). Prescriptions, too, are going electronic, starting with controlled substances, but soon to encompass all.

As part of that shift, eClinicalWorks® is proactively preparing our customers for September 1, 2021, when our eRx partner, Surescripts, will move to the new SCRIPT Standard Version 2017071.

Simply put, the new standard will bring greater ease and clarity to the sharing of prescription information between providers and pharmacies. There’s plenty to learn, but eClinicalWorks has made it simple by collecting everything at our Customer Support Portal, where you can get an overview, watch a video, and sign up for live webinars being held through June 30.

Some highlights of the new standard

Among the improvements Standard 2017071 is bringing to the world of electronic prescribing are:

If you’ve already clicked the customer support portal link, you already know how we’ve changed some wording here and there, polished those Jelly Beans, introduced ways to reduce sticky notes around your office, and made some common-sense housekeeping changes for a better user experience.

In short, one visit to the portal and you’ll be well on your way to a seamless transition to the new standard by August 31, 2021. The next morning, your practice can simply continue to send electronic prescriptions.

Then, when we include the new SCRIPT Standard 2017071 with a version of eClinicalWorks to be released later this year, they should handle the transition with ease.